“Since 2016 every time I’ve ever visited a foreign country was because I found a Flights From Home deal for cheap.

Since 2016 I’ve visited places like Israel, the Netherlands, Thailand, Spain, and a bunch more! Then in January 2019 Flights From Home posted a deal I’d been looking forward to for years. Salt Lake City to Athens Greece.

For years I’d known I wanted to go to Santorini Greece on my honeymoon. In January I had been dating my girlfriend for 4 years and we had talked a lot about marriage. We both knew that we wanted to get married. I was just unsure about when that could happen. I was nervous to take that next step in my life! But then that day in January when that deal popped up on my phone I knew that I could make it work.

So I booked two tickets to Greece for November. FFH kicked my butt into gear. 2 months later I asked her parents permission. A month after that I proposed. 6 months later we were married and 5 days after that we were sitting on the steps of Oia watching the sunset over the windmills and blue domes of Santorini Greece.

THANK YOU FLIGHTS FROM HOME!” 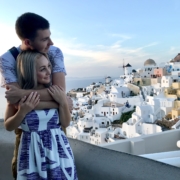 A Lifelong Dream Fulfilled in Mo’orea

Get Free Access to Hidden Deals and Save Hundreds

A Family Trip to Paris

A Multitude of Trips to 4 Countries & Counting
Scroll to top